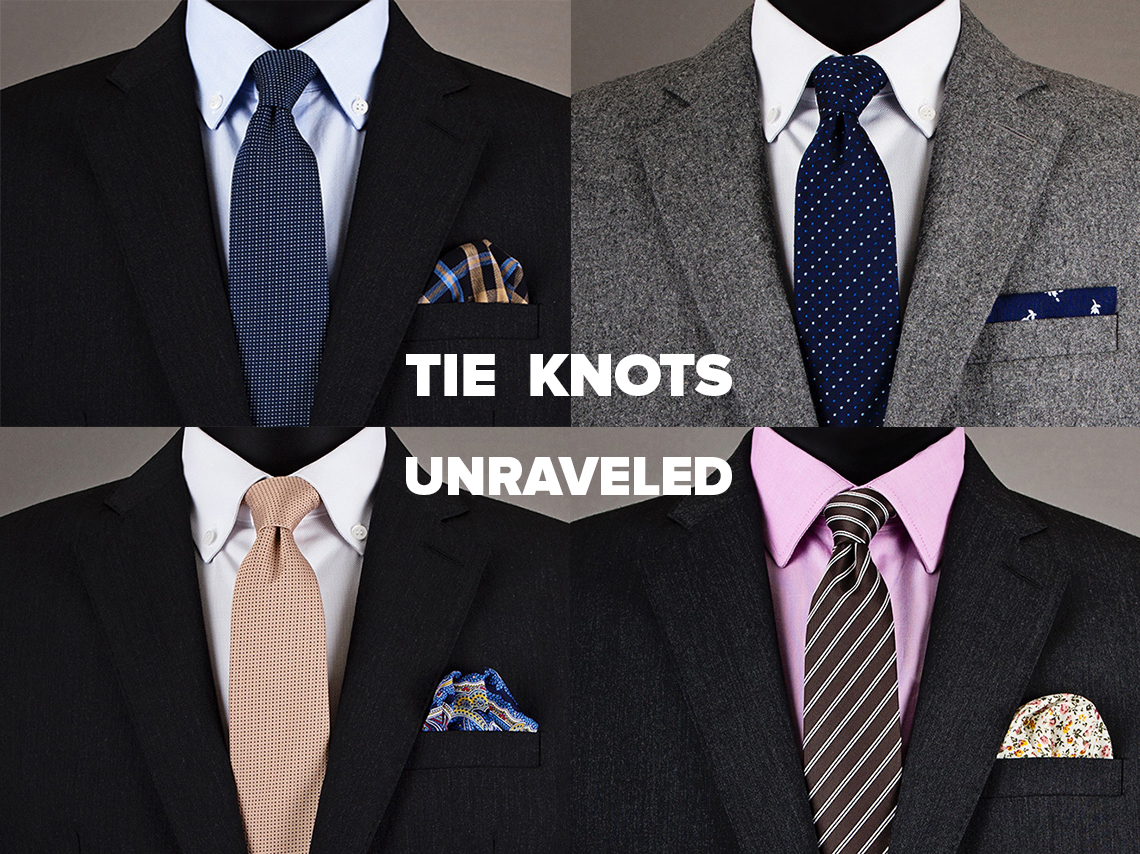 Also known as a simple knot, due to the little fuss required to produce it, the four-in-hand is by far the most popular and preferred way to wear a tie and the choice of the world’s best dressed men. It most likely originated from the members of the Four-in-Hand Club in London, who made it fashionable.

The knot produced by this method is narrow, slightly asymmetric, and appropriate for all occasions and face types. It fits well in all collars and is the best option for button-down shirts. It is by far the easiest knot to learn and use on daily basis.

Cross the long, wide end over the short, narrow one, wind it around and bring it back to the front. Pass it around once more, taking it up through the neck loop. Tuck it down into the knot and tighten it up. Draw the knot up to the collar.

There is no actual evidence to prove that Prince Albert, Queen Victoria’s husband, wore his tie with the knot in question. It is also called the double knot, because of the two wrappings that are needed to produce it. There is a more formal allure to the appearance of the Prince Albert knot, though it is not specifically tied to a certain dress code.

Pass the long, wide end over the short, narrow one and then back under it. Continue by passing the wide end over and under again. Repeat the same action one more time, but pull out the wide end under the neck loop and slide it into the knot. Tighten it up and adjust the position.

The half-Windsor is derived from the Windsor in that the tie is only looped around one side of the knot rather than both. It produces a smaller, narrower version of the Windsor that is almost as symmetrical and triangular, without using as much of the tie. It needs a bit more practice than the four-in-hand, but can be an equally fine choice for many shirt collars.

Position the long, wide end of the tie across the short, narrow end and wind it back and under. Bring the wide end up and slide it down and through the neck loop. Pass it around the knot and then up through the loop. Finish by sliding through the knot. Tighten it and draw up to the collar.

The Windsor knot is known for its wide, symmetrically triangular shape. It is believed to be named after the Duke of Windsor. The Duke preferred a wide knot and had his ties made with thicker cloth to produce a wider knot when tied with the four-in-hand knot. The Windsor knot was invented to mimic the Duke's wide knot with ties made from normal thickness fabric.

The Windsor knot is suited for a spread collar that can fit a larger knot. It does not complement sharp chins and jaw lines and is generally considered too made-up and formal. Ian Fleming mentions the Windsor knot in “From Russia with Love”, labeling it a sign of too much vanity.

Cross the long, wide end over and around the short, narrow one. Continue by pulling the wide end under the narrow one and wrapping it around the opposite side. Cross it over the front, slide it up under the neck loop and through the knot in front. Tighten it up and fix the position.

The dimple is very important to the appearance of the esteemed dresser. While it may look like an imperfection to the untrained eye, it is in fact an arty way to add some nonchalance to your look. It is easy to achieve and takes little practice to make perfect. All you need to do is pinch the tie just under the knot as you tighten it.