In the old days, there used to be uncompromisingly strict rules about what shoe goes where, when and how. Luckily, these days you can wear just about any shoe you like, anywhere and in any way you deem fit.  For those of you that need more confidence in their stride, we have put together some basic terminology and considerations to guide you in the world of footwear and help you make the sturdiest choices.

Closed lacing is the term used when the two sides of the shoe’s upper that are drawn together by the laces are sewn under the vamp (the front part of the shoe). This produces a sleek and dressy shoe, normally called the Oxford after the place that made them popular – Oxford University.  Other common names are “Balmorals”, “Bal-types” and “Bals”, all derived from Balmoral Castle in Scotland, which is believed to be the place the shoes originated from.

A pair of black cap-toe Oxfords is the epitome of formal shoes. The plainer, the more formal it is, so for your first pair go for discreet stitching on the toecap and good quality black leather to last you through all the important events you will need to attend. Tuxedos no longer require the shiny glow of patent on your feet, so black Oxfords will do just fine. Once you’re ready to expand your collection, move on to Oxfords with broguing.

Broguing (the decorative perforations in various parts of the shoe) steps away from plain, so the more of it, the more casual the pair. The term comes from the Scottish marshlands and the need to make holes in shoes to allow accumulated water to drain out. Now used just a design perk, broguing can be found in different styles both up and down the dressiness scale. The quarter brogues have perforations along the straight toecap and are the simplest and more formal type of brogues.

Plain-toe Oxfords are always very elegant and sophisticated, so a pair of those will make itself useful on many occasions.

The half brogues also feature a straight toecap with the addition of perforations in the center of the toecap. You can still pull off formal in these.

The full brogues, also called wingtips, have distinctly curved toecaps (like wings) that extend to the sides of the shoe.

Shoes with open lacing have their sides sewn over the vamp, which often extends to form the tongue. The result is somewhat bulkier than the Oxford and, hence, not quite as formal, but good craftsmanship can make a great difference on that front. These shoes are known as “Derbys” in Europe and “Bluchers” in the US. The latter carries the name of the Prussian field marshal Gebhard von Blücher, who together with Wellington defeated Napoleon at Waterloo. His soldiers allegedly wore boots with open lacing, commissioned by the field marshal himself. From an army shoe, the blucher soon became a sporting and hunting shoe and at the turn of the 20th century moved to town. 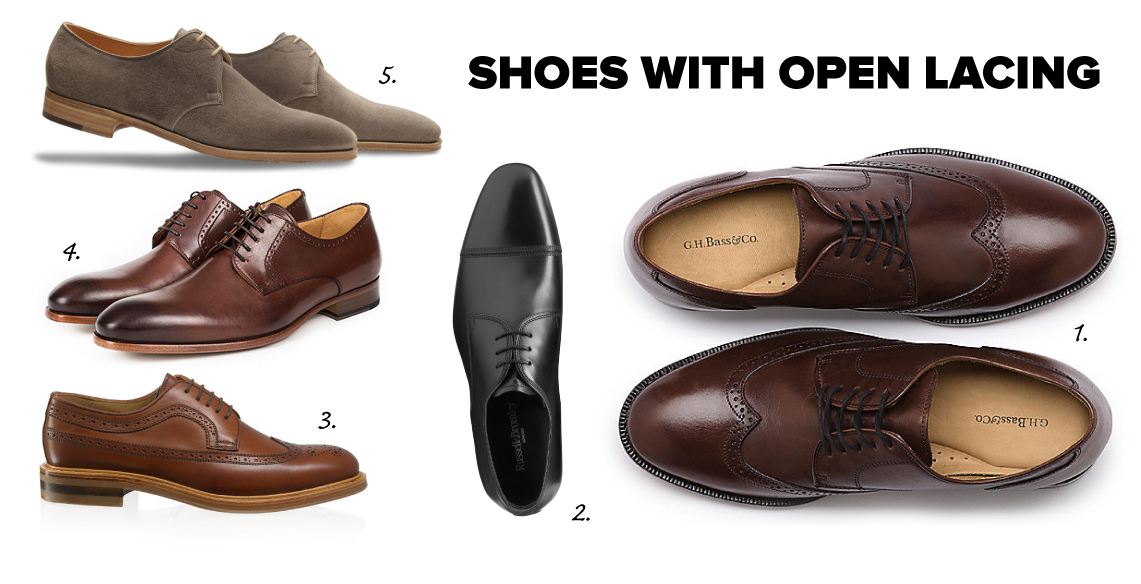 Broguing is quite often found on shoes with open lacing in the same variations as with closed lacing and even more. The brown wingtip Derby should be a top priority on your shoe-shopping list. They are the perfect choice for everyday suiting-up and work great with jeans and blazers.

A pair of Derbys without decorations can be referred to as plain-toe Derbys and, though less formal than the cap-toe Oxfords, can make a fine substitute. So would cap-toe Derbys.

A pair of longwing Derbys can be a stylish addition to your casual look. Their toecaps boast the same perforations as the wingtips, but extend all the way to the back of the heel.

For those with smaller shoe sizes, Derbys with three or two rows of lace holes (eyelets) can really lengthen the foot in an elegant manner.

Every shoe without lacing comes under this category. While traditionally considered casual and fit only for the summer, slip-ons have had a major comeback in recent years and should not be ignored. Loafers are the leader of this category. They exist in a multitude of styles – with straps, fringes, tassels, metal bars and ties.

The tassel loafer is a superb choice to start you off loafer-wise. It is the more fashion-forward loafer that dresses-up nicely too.

Monk-straps, or monks, take their odd name from their vague relation to the footwear of monks in European monasteries. They exist with one and two straps, where the two-strap monk is the trendier. These shoes look their best with shorter, slim-fitting trousers that narrow at the ankles and barely touch the shoe.

The one-strap monk is the more classic version. The trouser rules apply here as well, if you wish to show off the style properly.

Penny loafers are distinguished by the cross-strap over the front part, where Ivy League students used to put pennies. They get along great with lightweight suits.

A pair of suede loafers with ties is an absolute must for fancy yacht parties. Alternatively, you can make the most of them on your summer holiday.