So What Do You Know About Double-Breasted Jackets? Available From ANY Fabric!

Double-breasted designs are available with every fabric that we offer, and they’re a brilliant addition to any formal wardrobe, yet there’s an element of mystery around them. Let’s break it down and explore the wonderful world of the double-breasted design.

Our design is the Classic 6-button - 4 Central buttons, with another 2 set wider apart at the top. 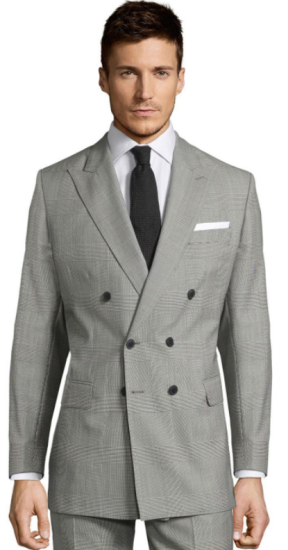 How Do I Order a Double-Breasted Design?

When you find your fabric and hit the big blue ‘Customize Now’ button, the jacket opening design is at the third window marked ‘Buttons’:

…yep, it is that simple!

Rather surprisingly, the double-breasted suit jacket initially appeared as casual English sporting wear in the late 19th Century. The design was inspired by the reefer jackets as worn by the ‘reefers’ of the British Navy.

The design was popularised in the 1920’s by none other than the Prince of Wales (later known as King Edward VIII), who had this design (and others) created by master tailor Frederick Scholte of Savile Row, London (Oliver Wicks wasn’t around back then…).

While a highly questionable King, his sartorial style was indisputable, and this tailoring partnership with Scholte existed for decades, having a strong impact on suits and formal menswear over the 20th Century.

Newcomers to the game may comment on double-breasted suits as being old-fashioned, but in truth, they’ve been around far longer than any trends and have a solid rooting as a menswear classic.

While this cut started out as casual, this couldn’t be further from the truth now, as it has been regarded as an exceptional business-formal design for many decades (despite a series of ups and downs in popularity over the last 100+ years, where the design really hasn’t changed much!).

Investing in a quality double-breasted suit in 2022 is a great idea if you’re in the market for a formal option that’s a bit flashy, in a tasteful manner, while displaying your appreciation of tailoring excellence, history, and culture.

Funny Story - During WW2, specifically in 1941, double-breasted suits were actually banned from a lot of UK office environments, for being “too casual”. We don’t like to judge… but that view didn’t age well… just saying!

We’ve mentioned that a double-breasted suit is now very, very formal, but we should also mention that they turn a lot of heads. This design is appropriate anywhere that a single-breasted suit goes, but you’ll be taking things up a notch and making a statement, much like how a pinstripe is associated as an old school banker’s power suit.

This makes the double-breasted jacket an ace up your sleeve for formal gatherings and important business meetings.

If you visit a department store, you may see a couple of double-breasted suits, but they’re certainly not common. When coming to us for Made-to-Measure, this works in your favour, as the nature of a rarer design indicates that your double-breasted suit is special and it leans further on the idea that you’ve had this suit tailored just for you.

Again, this will make you stand out from the crowd!

What’s your stance on this opinion-dividing classic? We love it!

Oliver Wicks - The Fit That Suits You